We have covered and reviewed quite a few Twitter clients before. Today, Seesmic introduced a new Twitter client that is powered by Adobe AIR. Currently, the Twitter AIR area is filled with many clients ranging from the top apps such as Tweetdeck and Twhirl to other less known apps. As a start, Seesmic Desktop might appeal to heavy Twitter users with its features and slick interface. Users of Tweetdeck may find Seesmic Desktop to be slightly similar in terms of its organization and design. 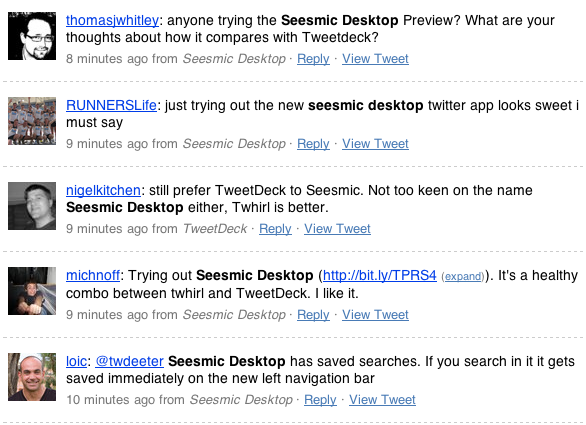 Currently, it is a Twitter-only client but there may be plans to add other services like Facebook. You can manage multiple accounts as well as share pictures from the app. Seesmic Desktop is currently a preview release and they are still rooms for improvements but already it is proving to be a potential Tweetdeck replacement as seen from Twitter users. To check out Seesmic Desktop, just install Adobe AIR and join the Team Seesmic to download it. We will be keeping more updates on this app so comment and let us know what you think!! 😀

AllThatsNew is an awesome blog that is updated with several posts daily. Most of the posts are short and takes less than 5 minutes to read. Visit this blog everyday to see interesting reviews and tips about the internet, websites and software. We hope you will enjoy your stay here!! : )

At AllThatsNew, we love comments. It is really easy to comment- just click comment and write a few words like "That's awesome!!" or "Sweet!!". It should not take you more than 1 minute. If you know any tips, comment and tell us. Thanks for commenting, we really appreciate it!!

Get Daily Tips And Reviews Here By Email

Get Daily Tips And Reviews By Email

Get Daily Tips And Reviews Here By RSS

Get Daily Tips And Reviews By RSS